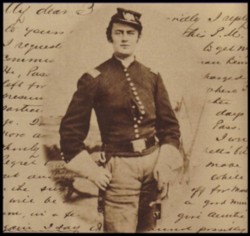 “I shall never forget the scene as I worked my way across the dreadful causeway. The bullets struck all around me, men were shot in various places of the body, some falling, others again staggering and struggling to make the other side, and all hurrying wildly on with the consciousness of the desperate chances they were taking. When nearly midway across, one poor fellow just ahead was shot, and in falling rolled over and over. As I came up to where he was lying, he clutched the tail of my overcoat, and in piteous accents called out, “Help me Captain, for God’s sake don’t leave me here.” Without stopping, I unfastened the overcoat from around my neck and left it in his death grip, saying I couldn’t help him then, but would send after him as soon as I got across. I pushed on, but the poor fellow’s soul had reached the presence of the Great Commander before I got to the other side.”